The Minister of Public Works and Housing, Eng. Yahya Al-Kasabi, and the Director of Public Security, Maj. Gen. Hussein Al-Hawatmeh, in the presence of the Acting Minister of Digital Economy and Entrepreneurship Ayman Al-Mufleh, two memoranda of understanding were signed in the Ministry between the Government Tenders Department and the Public Security Directorate.

The first memorandum of understanding, signed by the General Director of the Government Tenders Department, Eng. Mahmoud Khleifat, and the Assistant Director of Public Security for Management  and Manpower, Brig. Dr. Mutasim Abu Shttal, aims to achieve the electronic exchange of key data for foreign partners in contracting companies, which will reflect positively on the data documentation procedures for construction companies.

The second memorandum aims to obtain a service to inquire about vehicles of  contractors and companies, which is available through the database of Drivers and Vehicles Licensing Department.

Al-Kasabi stressed the keenness of the Ministry of Public Works and all its branches to support  cooperation with the Public Security Directorate in a way that contributes to providing the best services that the Ministry provides to citizens.

He said that the Government tenders Department was keen to adopt the concept of government automation and digital transformation by replacing traditional ways of working and developing plans and strategies to ensure the achievement of its goals with quality and efficiency to reach an integrated digital government that aims to implement the best policies and applications that support the digital economy.

Al-Kasabi stressed that, pursuant to the Rvisions, the government seeks to improve the economic environment for all sectors, which contributes to attracting and promoting investment, especially in the housing, construction and contracting sectors, as it occupies about 140 support professions, which contributes to supporting the national economy as a whole and providing job opportunities.

He indicated that the Directorate of Classification and Licensing in the Governmental  tenders Department is concerned with automating its procedures to achieve one of the department's strategic objectives by launching e-services (contractor license request, contractor classification, technical service provider classification), where the service recipient can submit the request electronically After attaching the required files.

The Minister of public Works praised the efforts of the partners in the Public Security Directorate for their continuous support and cooperation with the Ministry during the weather conditions accompanying the winter season or during the Ministry’s implementation of its important vital projects in various regions of the Kingdom.

for his part; Public Security Director stressed that the directorate's strategy is based in large part on partnership and coordination with various ministries and official institutions and providing support to them to achieve institutional integration, which His Majesty the Supreme Commander is constantly directed to because of its importance and its positive effects which are always reflected on the ground as an achievement and best services.

Al-Hawatmeh indicated  that the signing of the two memorandums of understanding today comes in a continuation of many previous cooperation frameworks with the Ministry of Public Works, especially traffic, on external roads.

In turn, the Director-General of the Government Tenders Department, Eng. Mahmoud Khleifat, confirmed that signing the two memoranda of understanding with the Public Security Directorate would provide the Government Tenders Department to obtain data of foreign partners in contracting companies and all data related to vehicles for the classification of contractors, which are considered among the conditions for classification contractors.

The signing was attended by the Acting Secretary-General of the Ministry of Works, Eng. Jamal Abu Eid, and those concerned from both sides. 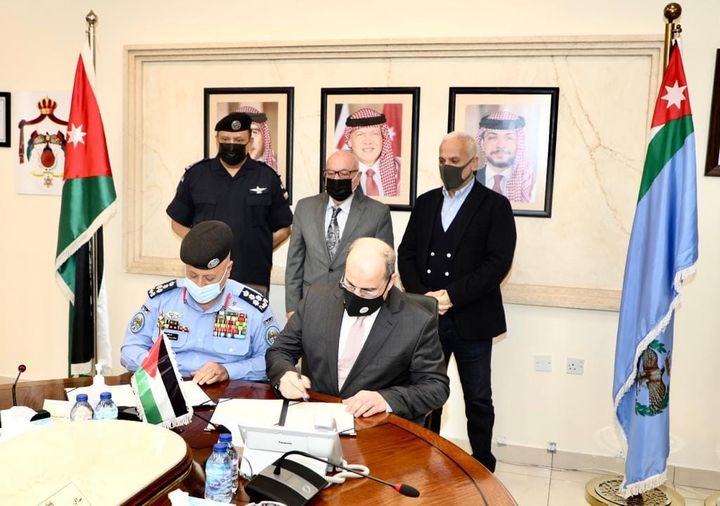