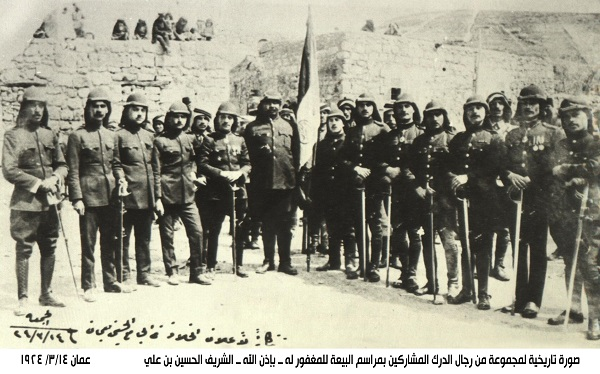 After the arrival of King Abdullah I to Amman to announce the establishment of Jordan Emirate to be a model for all Arabs, the story of Arab glory was completed

due to the beginning of the twenty-first century and the local, regional and international changes, and with an insightful vision for the country's future in terms of strengthening security and ensuring the sustainability of stability, the directives of His Majesty King Abdullah II - may God protect him - came to restructure the gendarmerie forces, and a royal decree was issued approving the law of Gendarmerie forces on 7-10-2008, after completing all its legal and constitutional stages, gendarmerie forces began carrying out the national duties in the protection of the citizens and the home country.

Hence, the royal vision of the gendarmerie was inspired by His Majesty's directives: "Towards distinguished security institution at the local, regional and international levels capable of contributing to enhancing internal security and stability

the Gendarmerie has witnessed many developments at all operational, logistical, training and manpower fields due to the royal support to the Gendarmerie forces by the Supreme Commander of the Armed Forces, King Abdullah II Ben Al-Hussein - may God protect him. The General Directorate of the Gendarmerie Forces has witnessed rapid and remarkable development, which has won the admiration of everyone at the national, regional and international levels, to be a distinguished security institution at the local, regional and international levels capable of effectively contributing to enhancing internal security and stability.

Since its formation, the General Directorate of the Gendarmerie has passed through stages of modernization and development, and it has been supplemented with the latest means, equipment, weapons, and missions. The five-year gendarmerie strategy (2016-2020), which came in response to the directives of His Majesty the Supreme Commander, which aims to develop the functional performance of the gendarmerie forces in accordance with the highest international standards.

The strategy of Gendarmerie forces … toward comprehensive security agency

the strategy of the gendarmerie depends on the implementation of the royal visions in addressing acts of violence and riots and combating terrorism and extremism through the security openness of the gendarmerie forces in all governorates of the Kingdom and setting clear plans for training and rehabilitating the personnel , developing preventive work against crime and manifestations of security breach and combating terrorism And access to the gendarmerie personnel to the highest levels of professionalism.

In order to achieve the strategic objectives of the gendarmerie, the gendarmerie forces have worked to create many units and other security formations. The Capital Gendarmerie Command was established to be the competent command, entrusted with maintaining security and stability in the capital, Amman. Likewise, the Aqaba Gendarmerie Command was established to carry out its vital security duties and protect facilities in the Kingdom. The commands of the East and Moab, and the Unit for the Protection of Important Facilities were also established to play their role in protecting national institutions.

The development also extended to include organizational restructuring to reflect on human development and the accompanying development of infrastructure and provision of modern technical and technological equipment that enables the gendarmerie personnel to carry out their duties in an optimal manner.

As the gendarmerie forces believe in the importance of openness to the security agencies in the world, the gendarmerie has pursued its policy of openness to all regional and international partners and has strengthened international partnership with the security agencies in the world. The efforts of partnership resulted in the signing of several security cooperation agreements, in addition to holding many internal and external security conferences and seminars, and attaching many officers, individuals to receive external courses that contribute to providing the gendarmerie forces with all the required expertise, skills, experience and security competencies

This participation was embodied in its best form under the chairmanship of the PSD Director- Major General Hussein Al-Hawatmeh for the Euro-Mediterranean Organization of Military Police and Gendarmerie Forces (FIEP) during the year 2017, where the General Directorate has been an active member of the organization since 2010.

In response to the visions of His Majesty the Supreme Commander in regards of the necessity of positive interaction with local communities, the gendarmerie committed to a great humanitarian role towards citizens and residents in the Kingdom, and made exceptional efforts in the field of public service and humanitarian conditions, and extended at helping families and the needy. the members of the gendarmerie provided honorable roles in providing security services in refugee camps, through professional and humanitarian personnel.

Believing in the humanitarian mission of the gendarmerie forces, the participation of the General Directorate of the Gendarmerie Forces in the international peacekeeping forces is the witness to the nobility and loftiness of this message by deploying international advisers and observers, FPU s to protect the vulnerable in conflict-areas worldwide.