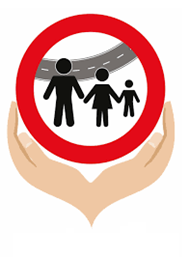 Public Security Directorate launched a national campaign to raise awareness of traffic and reduce traffic accide under the title " Together for safe arrival ", which comes in implementation of the visions and directives of the Supreme Commander of the Armed Forces, His Majesty King Abdullah II Ibn Al Hussein, in preserving the lives, security and safety of citizens.

the Director of Public Security, Maj. Gen. Hussein Al-Hawatmeh, passed orders to  all formations and units of the Public Security Directorate, to start a participatory campaign to promote a traffic culture based on adhering to traffic rules and avoiding traffic violations, especially dangerous ones.

Public security director said that we see of painful traffic accidents that are repeated for reasons that could have been avoided, is something that calls us all to stand together, stressing that the solution is beyond  the unified  efforts to consolidate the  traffic culture derived from our original values, through which we avoid dangerous behaviors and violations that threaten the lives of citizens

Public security directorate indicated that accidents resulting from human mistakes  cause nearly 98% of traffic accidents, in which innocent people are killed and cause great property losses, and these are causes that can be avoided if we stand together and abide by traffic rules.

The Directorate indicated also to the  participation and cooperation which are  the way to overcome many challenges and negative phenomena through participatory models that brought together the security man and the citizen together.

Public Security Directorate called on all citizens and institutions to contribute to this campaign through the roles of oversight, awareness and guidance. The campaign title (Together for safe arrival) came as an expression of the collective responsibility of all components of society, including official, civil and societal bodies.